/
by Justin McGee
/
in Misc, Scripting, Software
/
No Comments

Life is easy if you have domain joined computers. They get policies, they get your SOE and they get told when their password is about to expire (or has expired).

When you have a BYOD solution, this can become difficult. Sure, you can provide a password reset utility for users to use (such as Azure AD Connect Password Write-back through Office 365), but it’s not guaranteed users will remember where it lives, even if you make it as obvious as a big red button on the Intranet page.

It sends a nice looking email, that looks like this: 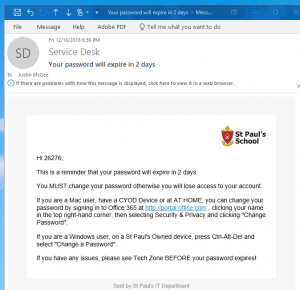 to users when their password is about to expire. It’s super simple, and works great!

I’ve attached the script and HTML template here – grab them, re-jig as you need to, setup a scheduled task and off you go… it works a treat!

Re-Entering the Education IT Industry

After a stint in the corporate world I’ve ended up back in IT where I began all the way back in 2006 – the Education Industry, and boy oh boy has it changed in the short time of 4 years since I was last here. I actually re-entered this industry almost this time last year, but I haven’t written any technical how-tos for a while and have kind of been biding my time and gathering my thoughts over the last several months.

When Kevin07 became the “thing” and 2008 rolled around, Kevin Rudd started handing out his buckets of Rudd money. It was exciting times, and this was in my opinion the beginning of the big shift in education IT. Suddenly, we had laptops for every student, more desktop PCs than we could poke a stick at, infrastructure upgrades to bring us into the 21st century and more, but more importantly things became, for lack of a better word, “better”.

Now, 10 years later, it’s amazing to see the change in the IT Industry in education. Public Cloud came along, and all of a sudden running that on premise Exchange server seems like a really dumb idea unless you have some obscure requirements, so everyone went in to Office 365.

Monitoring My Stuff with YupTimer

/
by Justin McGee
/
in AWS, Monitoring, Software
/
No Comments

In the day and age of 24x7x365 applications (basically, the Internet), it’s really important that you look out for outages and service issues – particularly when it comes to looking after customers that pay you money to look after their stuff (and also, your own stuff that makes you money or provides useful information to people!).

Previously, like most people, I’ve used Uptime Robot. It’s been around for a while, offers free and paid plans, and seems to be the “standard” before you start getting in to more expensive solutions (i.e. Statuscake and Pingdom… ouch!). But, one product that caught my eye recently was one that is new to market – called YupTimer. I saw a post asking for beta testers, and thought – hey I’ll give it a go, and I liked it so much that when they went out of beta I decided to pay for it!

/
by Justin McGee
/
in Uncategorized
/
No Comments

If you’re a Windows sysadmin, there may have been a time in your life when you want to monitor the performance of a system over a period of time.

By default, Performance Monitor will offer a System Performance report that will monitor the system for one minute, and the interval for which it runs you cannot set.

/
by Justin McGee
/
in AWS, Software
/
No Comments

I spend a lot of time putting together AWS Cost Calculators, and as it’s been a while since I’ve made a post, I thought I’d show off a neat little extension for Chrome that I put together.

The AWS Simple Cost Calculator – https://calculator.s3.amazonaws.com/index.html – is a great tool for putting together the cost of AWS Resources. Probably the biggest use of these would be for putting together EC2 Instances and EBS Volumes. For the AWS Uninitiated, these are the equivalent of a Virtual Machine and associated disks.

In a previous post, I outlined some shortcomings with the Palo Alto Networks Firewall “Global Protect” VPN Client. Have a read over the article for some information and a bit of background, but the long and short of it is that the Global Protect client has no native support for the use of multiple profiles/multiple saved connections, and if you are someone like me who is constantly changing between customer Global Protect gateways it’s a right-royal pain in the behind to have to retype your credentials and a hostname into the client all the time.

For those of us in the MSP or VAR world, we support a number of different technologies using a number of different platforms. Quite often however, we find ourselves deploying the same solution for different customers time and time again. One of these solutions I find myself working with on a regular basis is a Palo Alto Networks Next Generation Firewall.

Now, these devices are awesome – they blow competition out of the water with their entirely different take on how firewalls work (check this out here), but one thing that has always annoyed me is their VPN Client, aptly named “Global Protect”, and let me explain why.

For the average user, they get a device belonging to their corporate network (laptop, be it their own or a company issued one), they work for one employer, and they always VPN in to the same spot (that is, the office). All is well and good – for these people, the Global Protect client works well.

Let me start by saying I love AWS. AWS is awesome, and you can do awesome things with AWS. But, if you’re like me you find it annoying working with Linux instances on AWS.

Why is that, you ask?

Well, that’s because every time I download a new Key Pair for an AWS EC2 Instance, I have to go through the oh so tedious task of converting the PEM file to something that PuTTY can use (because PuTTY won’t use PEM files). In this day and age, this is too many clicks and we want something easy and convenient.

So what did I do? I wrote some software that will convert these files automatically from PEM to PPK. What’s this piece of software called?

Leave a comment below if you find it useful, or have any suggestions / improvement requests.